The best possible way for reducing packaging material to minimise costs and avoid later waste has been a hot topic since well before the current legislation, notably among food processors. Detailed solutions have already had a remarkable effect. One interesting example of this comes from Laru GmbH. By applying anti-slip adhesive directly on the shipping cartons, the company not only saved a considerable amount of stretch film, but was also able to eliminate anti-slip cardboard.

The long-established company founded in 1939 by Karl Langensiepen and Heinz Ruckebier in Essen - the current name of the company is the result of shortening their last names – moved to the current production and administration site in Bottrop in 1993. It specialises in the production of goose and pork lard in a wide range of varieties and container sizes as well as beef lard. There are numerous possible uses for these products. Lard enjoys great popularity, not only as a sandwich spread, but also in baking, for example as a tasty refinement when preparing cabbage and herbs, or to enhance the flavour of sauces and soups.

In 2017 Laru produced a total quantity of 9600 tonnes. The fact that about one third is packaged in smaller containers such as cups and bowls or rectangular solids wrapped in paper, while 6600 tonnes is sold in large containers like buckets, pails and even 900-kg IBCs, shows the ratio of retail and wholesale, i.e. the profile of industrial customers. While end consumer business is carried out mainly in Germany, B2B sales are concentrated to a large extent on export. This now accounts for about two-thirds of sales volume. The important foreign markets for Laru are Great Britain including Ireland, the Benelux countries and Eastern Europe.

In recent years, cardboard packaging, or to put it more precisely, bag-in-boxes, have become increasingly more important for shipping packaging. Fefco 0201 cartons fitted with base and top flap with ten or 12.5-kilogram content have been used most often for industrial products. Optimum stability of pallet loading is especially important in view of the HGV transport routes, which are very long. An anti-slip adhesive technique based on hotmelt adhesive has been applied recently for this purpose and has proven to be extremely effective. A weight of about 800 kg for each load carrier is still achieved.

Cartons as primary and transport packaging

The technical implementation is explained here in detail based on the example of shipping cartons, which are used essentially as both primary and secondary packaging for beef lard used to fry French fries. Beef lard is used for this purpose especially in Belgium.

A bag-in-box machine produced by Pattyn Packaging Lines is used at Laru to erect, fill and seal the cardboard packaging. The hotmelt application components are manufacturing by Nordson Corporation, the US American adhesive technology specialist, with European headquarters in Erkrath.

After the boxes are set up and the base flaps are glued with hotmelt, they run through a station where a foil inliner is inserted and they are filled with beef lard, still liquid at 25° C. Next the plastic film is hot-sealed to form a bag. Adhesive tape is used to seal the top flaps.

Then two hotmelt beads about 8 cm long are applied immediately after the sealing section longitudinally on the top left and right. Two pneumatic applicators of the Nordson MiniBlue II series are installed for this purpose. They are supplied from a melter from the proven ProBlue series. Since only relatively small quantities of hotmelt are needed, the company opted for the smallest model – size 4, which is fully sufficient for this application.

One part of this hotmelt application system, which has been a standard in the industry for many years, deserves special mention: the innovative Spectra 30 application pattern control system, which features easy handling and flexibility. It is equipped with the intuitively operable Optix graphical user interface and has four control inputs, four sample channel outputs and a USB port on the front for data backup. 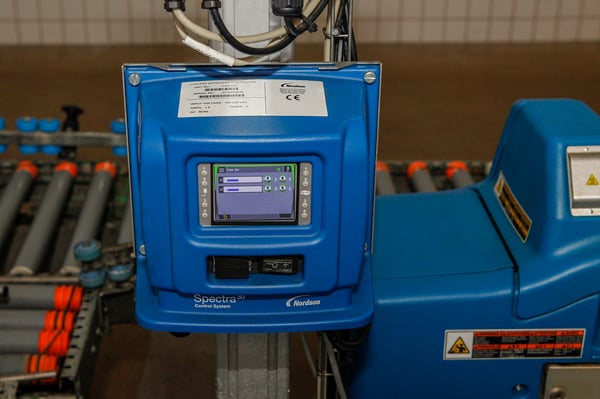 The device can be used to adjust eight bead sequences per channel and a wide variety of different adhesive application patterns. Storage capacity is available for 50 programs. The Spectra control unit can also be used at high line speeds and can be mounted individually by a special attachable mounting device.

The cartons are supplied for palletising on a conveyor belt that is sufficiently long to cool off the blocks of beef lard and allow them to harden. This task is performed by a suction gripper, which receives two units at a time and stacks them transversely and longitudinally according to the layer pattern. The hot melt beads are positioned so that they are not touched by the grippers.

For 12.5-kg containers a load carrier contains a total of 60 cartons, and even 80 for the 10-kg version. The manual shaking test demonstrates surprising structural stability, so that ultimately only one layer of stretch film is needed – more as protection against external damage than for safety reasons. Regardless of the horizontal strength, the cartons can easily be removed upward with no damage during stacking. The hotmelt beads can also be removed again easily. 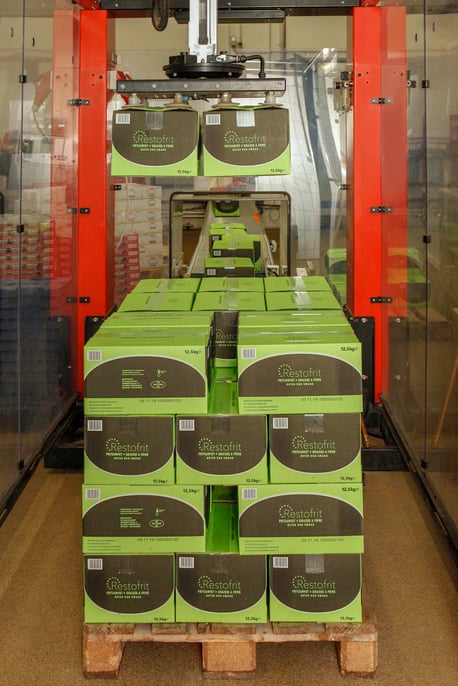 For 10-kg containers, 80 cartons are stacked on a pallet safe for transport with the aid of suction gripper

"With this method of securing the load we save 58 percent in stretch film compared to earlier," emphasise Laru Plant Manager Detlef Kleine-Buckstegge and Markus Rogler, who is responsible for production and purchasing. "In addition, we can eliminate anti-slip cardboard entirely, which is very labour-intensive anyway. Banding is also not an optimum alternative for us."

Another positive cost effect worth noting is the drastic drop in the complaint rate. "It is headed towards zero. For example, in 2016 we had 32 reported cases of damage, and the response came to about an 8000-euro hit on the books. The bottom line is that the new adhesive system pays for itself quickly." And last but not least, Laru employees praised the professionally competent consulting with Nordson Area Sales Manager René Bartsch, who supported the technical implementation.